The second part of my ten-day trip to Georgia involved spending time with my cousin in Atlanta as well as attending a camping festival with him in northwest Georgia. We’d never spent more than an evening together before this so I was a little nervous but also excited. And because we were camping, I looked forward to the time I’d have to reconnect with nature.

Wednesday afternoon Joseph and I made cakes for the festival with his friend Kate. That night, Joseph and I went to dinner at the “W”, where he works. We rode over on my bike and pulled in front; they have valet only parking but gladly made an exception in our case. I rarely eat at fine dining restaurants and was unnerved by all the attention: staff filled our wine and water glasses after only a few sips, replaced napkins several times and brought new silverware between courses. After a long dinner filled with sumptuous food, we rode around the city.

Atlanta is large but riding around the streets it didn’t feel like it. It has a relaxed easeful vibe about it. I was taken in by the unique buildings. One of my friends who loves cinema, has a knack for identifying cities in movies. She’d say, “see that building right there? That’s in Seattle!” At the time I was awed by her ability to do this. Now, with all the traveling I’ve done by bike, it seems natural. Each city has its own feel and it’s own shape against the sky. Generally, I’m not a fan of riding on the expressway but on a bike it's different.  I welcome a ride around and then into a city because it provides a distinct vantage point. Riding then, has made me more aware and appreciative of not only mountain views, but city views.

The next day we packed our gear in a friend’s car and took my motorcycle to the farm where the festival was taking place. We jumped on the expressway to get out of the city then slipped off to ride among hills and fields. I rarely ride two-up so it took some getting used to. I don’t adjust my position as readily when there’s another rider on the bike so I got sore more quickly. One thing I’ve never become accustomed to, is how every movement of a passenger makes inputs into the bike that I have to counter.  At each stop sign, I’d look back and give him another instruction: “hug your knees around me when we’re at slow speeds” or “wait to reposition yourself until we’ve stopped and my feet are on the ground.” It felt foreign having another rider along, but also fun to share the experience.

Although the land where the festival was held was at a farm, it had no crops, no livestock and no barn.  The owners rent out the property for various events throughout the year. It’s a perfect location because it’s set off the road and situated between hilly meadows and forested areas. It has a stage, a pond, and a pavilion that are all connected by a winding dirt road that runs through it. Alongside the road, are group camping lots and trails that lead back into the trees for wooded campsites.

I’ve been to a few music festival camping weekends but nothing quite like this one. This gathering was organized to celebrate Beltane- a pagan festival centered around the May pole. In the interest of preserving the sanctity of the week, I won’t discuss details of the celebration.

Approximately 200 people came out to celebrate with music, dancing, a pot-luck and bonfires. Many knew each other from previous festivals. As people arrived, they introduced themselves. Even as our numbers grew, and it was impossible to meet everyone, people made eye contact when passing each other and extended a greeting, treating each other as though they’d met somewhere before.

My tent sat some distance from the pavilion, off a long trail that lead into the forest. It was in a small clearing surrounded by a ring of trees. I collected large branches from the surrounding woods and hung them between the trees. They formed a fence-like structure that encircled my camp. A stump became a chair and several rocks topped with a board, became a ledge for my canteen and knife. I hung my hammock made from orange nylon between two sturdy trees. 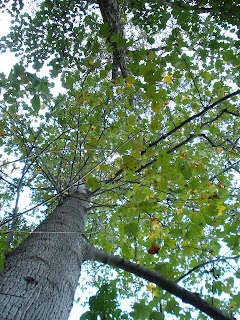 Joseph introduced me as “my cousin Lisa who drove all the way from Michigan on her motorcycle." In his simple introduction, he helped people connect to me. He told them what they were doing was so important that people would come far to experience it.  And he gave them, as one woman described it, “a whole different picture” of me.  Indeed, as the weekend unfolded, I heard again and again, “oh, you’re the one who drove down on your motorcycle!”

Friday night, I gathered in a circle of women in a pasture lit only by stars. For hours we danced and sang accompanied by drumbeat. Afterward, I felt tired, but also renewed and purposeful.

Saturday afternoon while the women cleaned up camp and prepared food for the evening potluck the men took part in their own gathering. They sang while they worked. Their words reverberated through the camp, lending its potent energy to all we did.

That night we all gathered around the Maypole and sang and danced together to the rhythms of a celtic band. Tea and the cakes Joseph, Kate and I made were passed around to the crowd. Afterward, we shared the potluck meal while another band played for us. The evening wrapped up with a bonfire.  Masterful drummers sat nearby while women danced in small groups at the edge of the fire.

Every day was different but a similar thread ran through each. After some time with others, I returned to my camp. I climbed into the hammock and stared at the canopy of trees above. I reflected on our interactions and the rituals we engaged in. After a time, answers came to questions I didn’t know I’d asked.  They came to me as if carried on the trees that swayed back and forth above me, shaking their leaves at me.

After this long weekend, of camping, dancing and celebrating I felt renewed and more connected with myself and nature- exactly what I was hoping for. I also felt connected in some mysterious, primal way, to many of the other campers. That was completely unexpected.
Posted by Unknown at 12:50 PM