When I woke up this morning, fluffy white snowflakes were falling from the sky. I'd rather be on the bike than on skis so this isn't good news but with no accumulation, it's a slow start to Winter and I'm grateful to be easing into it.  This time last year, I was in Peru...

Three of us flew together from West Michigan through to Peru on the day before Thanksgiving. Can you say long travel day?! Grand Rapids to Chicago to Miami to Lima - through customs- ugh!) - and finally to Arequipa. We arrived a few days earlier than we were scheduled to ride so we could acclimate to the altitude.  It worked out well because that gave us two days to recover from our hectic day of flying, check out the city and review our tour plans with the guides. The remainder of our group arrived in the days following.

Arequipa is the second largest city in Peru (by population) but you wouldn’t know it from the airport. As I looked down from the plane I was mesmerized by brightly colored squares – turquoise, magenta and yellow- and flickering silver shapes. As we descended these squares became cubes and were quickly revealed to be metal roofed houses sitting precariously close to the airport.  (This had me wondering if land near an airport is cheap because of all the air traffic!)

Our plane landed near a simple building right out of the 50's.  If it weren’t for the sign above the door (and the airplane we’d just come out of) I wouldn’t have believed it was an airport.  With the view being what it was, the building didn’t really matter though. We exited the plane via large wheeled staircases to find we were surrounded by three mountains. I found out later, during a tour in the city these we actually volcanoes.  One of them can be seen below, right behind the airplane.

Our tour package included transportation to our hotel. We were picked up by two cabs - this is the first of many examples of Peru Motors expertise: they know just how much gear folks bring on these trips.  Between the three of us and our luggage, we completely filled both vehicles. I don't know which view was better- the one of the city or the cab itself. Check out the in fur-lined dash! 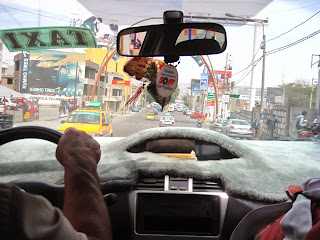 The owners of Peru Motors have a hotel in Arequipa called La Gruta. The building was a good introduction of many we encountered on our trip.

The exterior was modest and simple, which belied what was found inside.  Beyond the front desk was a dining area.  The first floor rooms extended from that down an interior hallway. Each of the rooms exited onto one of two lush outdoor gardens filled with tropical plants.

My first morning there, I sat in the outdoor garden off my room luxuriating in the sun. Lars, one of our guides, stopped in and warned us to be careful as the sun is very low in the sky and you can burn easily. Mind you it was 8:00 in the morning so I never would have thought to put on sunscreen. That was one of many things that made me feel like I was in a different world!

If I were to pick out key phrases from this blog over the years, I’m sure I would find “a different world” a dozen times. It seems to be a theme of mine to refer to this. More than that, though, I think it’s something I both associate with, and look for in riding. In fact, I think that’s why I ride. I want to escape the everyday. I want to flee normalcy.

I came across a quote recently that really hit home:

“When’s the last time you did something for the first time?”

I don’t particularly like routine, but I tend to fall into it. At about the same time each evening I start getting ready for work the next day- packing a lunch, setting out my clothes. I brush my teeth, do my stretches and head to bed. While the regularity helps me get out of bed in the morning, it also ensures I’m bored. And that’s the thing about Peru. Every single day, I did 800 things for the first time.

You read that right. 800. Now I never actually counted but that’s what it felt like. And instead of getting nervous about forgetting something or anxious that I’d be late, I felt free. I felt wildly and ecstatically free! I woke up around 5:30 each morning without an alarm (never in my life have I done that- this in itself is miraculous) and I was absolutely exhausted by 9:00PM. I didn’t have too many “nights on the town” like some of guys did, but I didn’t miss a thing.  At home I often wish there was someone to get out of the house with. I browse local calendars of events for “something fun to do.” While in Peru, everything was fun. Everything was new. Life had energy and I had zeal. I didn’t have to look for it or manufacture it.

When I talk about missing Peru, that is what I miss. Everything new.

Of course, when you set yourself on a course for adventure, things don’t always go as planned, and this was no exception. When the 10 of us signed up for this South American tour, we elected to tour 3 different countries- Peru, Bolivia and Chile. Once we got there though, we found out from our tour guide that there were issues with the border crossings. To be fair, we’d been warned there were always issues with border crossings and that travel can be significantly delayed because both people and the bikes have to clear customs. After much discussion and a vote of the majority, it was decided that we forgo Chile (and therefore Bolivia- because we needed to go through one to get to the other) and remain in Peru.  Our guide insisted we would get a far better tour by staying in one country because there was so much to see in such a short distance.  And he was right. Our tour involved the southern part of Peru and included high jungle, snow-filled mountain passes, desert, and the coast. And we were able to add in Machu Picchu, too.

But because we had planned for over a year about what we wanted to do while there, it was pretty disappointing to find out we couldn’t take the trip we’d planned. That first day of riding, we talked about it at several stops. Even the next morning it came up. And one guy decided to cut his losses and head home because he couldn’t let go of the trip he wanted for the one we were getting.

While I wish Bob had been able to adjust to the change the rest of us did, his choice to leave influenced many of us in an unforeseen way: we continued to ask ourselves throughout the trip “what if I had missed this?”  That became a lesson for me, almost a mantra. How many things do I miss in life because I’m so disappointed (or frustrated or angry or sad) about what didn’t happen. I’m the first one to say we need to feel our feelings when they come up, so I’m not talking about pretending everything’s all right when it isn’t. But I began to see how easy it is to get stuck in those difficult places and forget to enjoy the ride.

If there was a second theme to most of these blog posts, that would be it: enjoying the ride. But let’s face it, figuring out how to ride a motorcycle, isn’t the same thing as figuring out how to get through some of what life throws at you. Or is it?

If you've read any of my other posts, I guess the cat's out of the bag; I learn a lot about life through riding. Maybe I won't be spoiling anything by saying that as I review photos and share more about  Peru you're likely to find out a little of what I learned as well as see photos from a spectacular country.  Set your alarm and get ready for the next leg of the adventure with me!
Posted by Unknown at 3:43 PM