Nearly six weeks ago, I climbed into my truck and haven’t looked back at the bike. I removed her battery, filled up her tank and settled her into the corner of the garage to rest until Spring.  I will miss riding her, miss the trips out of my everyday life into other worlds. But as I sit here reflecting on the past year, I realize I have enough memories of riding to keep me through the Winter.

Last year at this time, I was packed and ready for my motorcycle trip in Peru. Although I came home, it’s as though I haven’t really returned. It took me a month to look at the pictures we took because I hadn't wanted it to end. The events of those weeks were burned into my mind and yet revisiting them seems painful because I miss it so much.  I’ve not written about the trip or much else since coming home. I know it will be some time before I can take another trip again whether its back to Peru or on to other countries like India or Scotland. I think in some ways, I’ve been holding so tight to those memories to keep them safe, to keep them mine for just a little longer.

A few months after coming home, I met up with members from my motorcycle club for a slide show presentation of about a 100 pictures.  I talked about some of my favorite things but kept the stories and  details to a minimum. I couldn’t figure out how to talk about this trip in a way that captured my experience of it. Still, I’m surprised I haven’t written about it yet. I had even planned to write another article for Rider magazine about it and that hasn't happened.

Last year while unemployed, I received assistance from the government to support myself and got financial help from friends and family.  One of the people who went with me- who I invited along - told me a few days in, how angry he was that I took this help.  His argument was so forceful and so devoid of any compassion that it divided us. I couldn’t understand why his politics were more important than me or our friendship.

In writing this, I realize that some of my silence about the trip is related to my shame about my financial situation that year and the fact that I needed help. I wanted the support of my friend.  I couldn’t believe I had let someone who was so selfish and mean get so close to me. I was angry I had given him my friendship and that he chose not to support me when I needed it most. We haven’t seen each other since. While there, I had put all those feelings about him aside so I could enjoy the trip. While it was only a small part of what happened while there, I can see now how much it impacted me.

As I sit here typing, I peer outside to see a mail truck door slide open and my carrier reaching inside.  Soon I will hear her footsteps on my porch stairs and the metal latch on my mailbox open as she slips my mail inside.  A year ago, this is what I would have seen and heard. Now, after one year into my nursing job with the Postal Service, I see so much more. I notice she is dressed appropriately for the weather and that her footwear is sturdy and protective. I notice that her satchel is positioned across her body to distribute the weight. I know she has been trained to use it to fend off a dog attack if necessary. She is careful to finger her mail while stationary to avoid tripping.  Her boxy white vehicle is referred to as an LLV (Long-Life Vehicle) and she has parked it strategically to avoid being hit.

Once, years ago, I ran into this carrier at the grocery store. Although we had waved, I had never spoken to her while she was delivering my mail.  In the store I walked up to her and told her I thought she was my carrier.  She asked for my address and when I told her, she described my house to me! I didn’t know until then how much carriers know about the neighborhoods they work in.

So I have established myself as an Occupational Health Nurse and while I hadn’t forseen my career moving in this direction, I have enjoyed the change. In my office at work I keep framed pictures from Peru nearby.  One is a close-up of the architectural details of a building in Arequipa.  Another picture is a view from a mountain road overlooking the mountains in the distance. 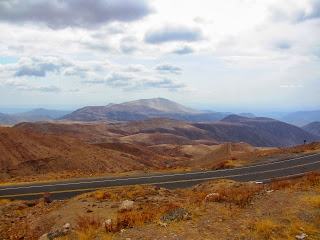 When I think back to Peru, there are things I hope I never forget.  Like how it felt as though I was riding through a watercolor painting because the beauty of the landscape was so overwhelming. In fact, I often found myself riding along with tears streaming down my face.  There was a simplicity to life in Peru that drew me in.  Our lunch stops were leisurely as we waited for our meals to be prepared - either soup or meat. While riding in the mountains we saw homes with thatched roofs that stood amid fields surrounded with square plots outlined in rocks. 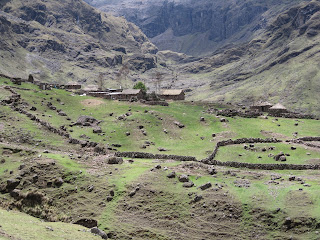 I saw fields being plowed with oxen and sown by hand.  Once while riding along, I saw a farmer reaching into his sack for a fistful of grain. I watched his arm move back and forth again and again in a rhythmic pattern, the seeds spraying forth from his hand with each swing of his arm.  He had done this a thousand times before.

Streams flowed down mountains and ran right over the roads; the engineers hadn’t bothered to find another route for the water but instead let it take its natural course. (There is a tiny red dot in the center of the picture- that is Lars on his bike approaching the waterfall.) 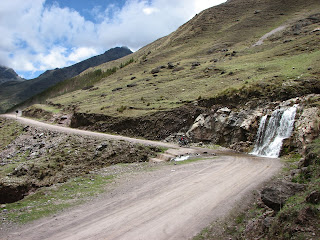 I've only described a few of the many moments where I was lost in time, lost in the experience of it all. While I know that reading about it isn't the same as experiencing it, I nevertheless feel an urgency to communicate more about what happened for me while I was in Peru. It’s a siren call pulling me back and encouraging me to bring others along with me, too. The photos I have are a vivid reminder of how much I saw in one day, how many places and people, how many mountains.

At work and at home, I've settled back into ordinary life. Preparing meals, cleaning the house, making phone calls, shuffling paper. I'm grateful for an interesting job and that the difficult choices I made last year allowed me to keep my home. I am still working to pay off some debts but it feels manageable. A few weeks ago, I had the option of signing up to contribute to charities through payroll deduction. The decisions came easy and included one organization that fights homelessness. I have spent the last year continuing to grow in my relationship with Tom, a fellow rider who also came on the trip. We talk often about our time there and plan to visit more places together. Things are good in my life, steady and stable, but there is something missing. I think it's back in Peru.

I have talked about the roads, the landscape, the people and yet still I have not mentioned the feeling of place while there. I could have focused the whole post on this one aspect of Peru. Some directors understand this concept so thoroughly that it becomes a character in their films. While I know of this, I hadn’t experienced it until I was in Peru. The feeling of the land there was as much a part of the trip as anything that happened while I was there. The land itself was like the protagonist in a novel. It was the thing through which all was experienced and around which all things unfolded.

One morning I was riding along a straight stretch of road. Off to my right there was a vast expanse of flatland with herds of vicuna roaming about.  (These are deer like animals). On my left side, a mountain rose up out of the land. My eyes were continually drawn to look upon it. With its jagged and rocky face, it became personified.  Although the mountain was one thing among many in the landscape, its presence was palpable.  The lure of it was so strong that I finally pulled off the road so I could capture it with my camera. It would not be ignored. (And of course the picture does not capture the feeling it imparted to as we rode by it.) 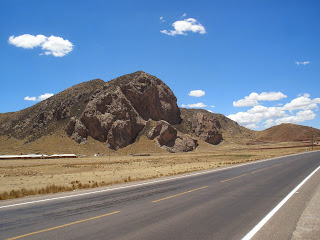 For those of you accustomed to traveling in the Appalachian or the Rocky Mountains, this account might seem strange. Let me assure you, it was strange to me as well. Despite numerous trips through other mountain ranges, I had never had a personal encounter with a single mountain. I’d never felt one reach out and pull me toward it. But that is what happened in Peru. And it wasn’t just this one mountain. They were everywhere.  In fact, you’ve likely seen the most famous one in pictures of Machu Picchu. If you’ve never noticed it before, take a look. 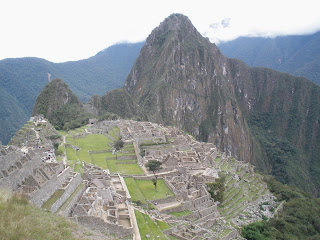 Can you see how the mountain seems to stare down into the grassy "town" below it? This isn’t just the perspective of the photograph- it’s what you feel while standing in front of it. There is an ancestral quality to it. Pure and simple, it’s sacred.

I’m glad I finally took some time to write about this trip. Keeping so much of it to myself for so long must have been necessary on some level.  But I have to come out  from behind my desk at the office and stare into those pictures a little more often.  I can hear these mountains calling out to me. I know they have more to tell me if only I'll listen.  Perhaps you'd like to come along, too?
Posted by Unknown at 7:37 PM